Home > News > Everything you need to know about sabering champagne

Everything you need to know about sabering champagne

Often performed at festivities to amaze the crowd, sabering champagne involves striking the neck of the bottle with the back edge of a saber or similar object. The neck then breaks off easily due to the accumulated pressure in the bottle.

Champagne sabrage is far from being a conventional way of opening a bottle, but it is still impressive during big celebrations. Learn more about the origins of champagne sabering and how to successfully saber a champagne bottle.

The origins of sabering champagne

Legend has it that sabrage became popular during the Napoleonic wars of the early 19th century, where Napoleon’s army celebrated their victories over the Austro-Hungarian Empire by breaking out the champagne. The Hussars then used the back of their sword, the cavalrymen weapon of choice, to quickly open the bottles with a grand gesture. They celebrated by toasting to victory, strength, virility and… to ladies!

Several cavalry regiments around the world adopted this technique to celebrate their victories on the battlefield. This is probably why sabrage is now associated with joyful and festive events.

What you need to know for successful champagne sabering

What object should you use to saber a champagne bottle?

The pressure in the bottle will try to eject the cork from the neck. With contact, the cork pushes pressure against the neck and slightly weakens it. The part of the bottle directly under the neck is a weak spot on the bottle as it is thinner than the neck itself. It cannot break under any type of impact but remains a crucial weak point in the art of sabering. Another weak point of the bottle is the junction between the two half-bottles, called the seam, simply because it is an irregularity in the glass.

This information should make it easy to locate the exact spot that the object needs to strike to saber a bottle. For successful sabrage, a micro-fracture needs to be created at the junction of the seam and the neck, the bottle’s double weakness.

A sharp object isn’t necessary because the bottle gets “decapitated” rather than cut. Any object strong enough to absorb the shock can therefore be used, from the reverse side of a classic Napoleonic-style sword to the base of a champagne glass.

Should you prepare the bottle for sabrage?

Some recommend cooling the bottle to create a thermal shock, but this is not entirely necessary since a reduction in temperature also leads to reduced pressure in the bottle.

Others mention rubbing the bottle with the saber to help create thermal shock. In reality, thermal shock is unlikely because the friction speed and the small contact surface do not allow for significant heat exchange.

The best technique is to saber the bottle at serving temperature.

How to saber a champagne bottle

Sabering a bottle can be quite dangerous as the cork releases quickly and could seriously injure someone. Make sure to point the head of the bottle away from any person, animal, plant or fragile object.

The first step is to remove the foil and wire cage from the bottle. Make sure to do this carefully because the pressure can result in the cork being propelled without having been sabered.

Next, hold the bottle from the bottom, keeping it at an angle between 30 and 45°. This gives you an optimal striking angle without too much spilling when it opens.

You then need to locate the seam, which is the weak spot you want to hit for a clean cut of the head. Place the back of your champagne sabre blade flat on the seam of the bottle, bring it back towards you, and hit the neck of the bottle without hesitation. Be sure to bring the blade to the neck at a slight angle, then continue the movement to the end of the neck. If you stop the blade too abruptly, it may not give the desired result or may only partially break the neck. Of course, it can take several tries before you get a perfect cut!

The final step is to serve the champagne. Cheers!

Treat yourself to exceptional champagne tastings

Do you occasionally enjoy a glass of champagne? Some accessories are essential to enhance your tastings. Vinum Design offers many of these, including glasses, buckets or corks to preserve the bubbles when your bottle is not finished.

If you prefer to reserve sabering for special occasions, some accessories such as champagne openers, offer safe and easy opening. Discover our champagne accessories today and treat yourself to exceptional tastings. 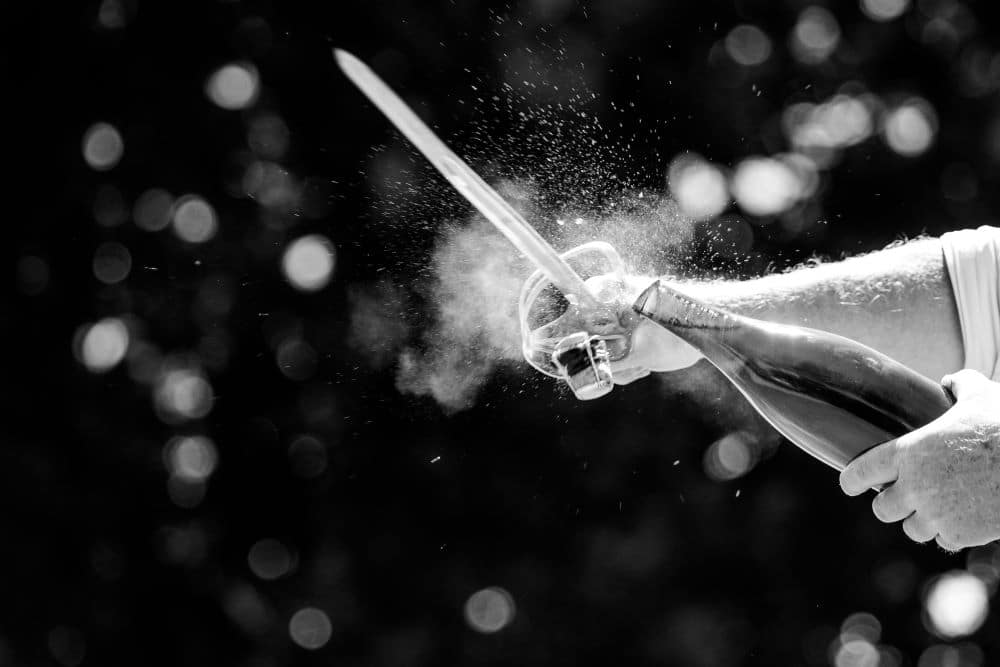